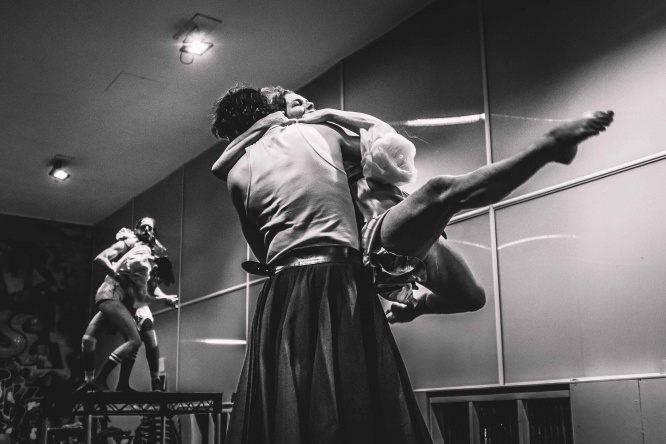 This year we're celebrating our 25th anniversary in true balletLORENT fashion with After Dark, an intimate evening of dance and drinks, cabaret style at Northern Stage running for four nights from 7-10 November. After Dark will be an exclusive chance to experience scenes inspired by the ever popular la nuit intime and The Night Ball, with some original dances to savour for the very first time, an exhibition of unseen photographs from the archive, a celebration of our heritage and a soundtrack of our favourite music and songs. Tickets are £25 each and include a complimentary celebratory drink.

“For balletLORENT 2018 is a year to reflect on a body of work that has developed over 25 years and share our story with a wider public.  We will demonstrate from our archive our achievements and our challenges as we have grown in scale and experience as an independent company. We hope to continue to inspire audiences and our peers as we celebrate the company’s fantastic dancers and collaborators that have made balletLORENT's work distinctive and memorable.” Liv Lorent MBE

In 2014 Liv was awarded an MBE for Services to Dance through the New Year’s Honours List. Liv has received many awards, including the Jerwood Choreography Award 2001; the Arts Foundation Choreography Award 2005; A Herald Angel Award LUXURA 2006 (a commissioned work by Scottish Dance Theatre); 4 Journal Culture Awards: Artist of the Year 2008; Performance of the Year (Rapunzel) 2012; Finalist in the Arts Council of England category (Snow White) 2016 and Performance of the Year (Rumpelstiltskin) 2017.

balletLORENT became an Arts Council of England Revenue Funded Organisation in 2003 and was made a National Portfolio Organisation in 2012. They were also named as an Associate Company of Northern Stage, and a Sadler’s Wells National Strategic Partner earlier this year.

“Most of the company dancers have been working with balletLORENT for the last 20+ years. I am very much in awe that this eclectic group of highly experienced dancers continues to tour with me and offer themselves body and soul to the work we make together.” Liv Lorent MBE

balletLORENT is a dance company with a difference as Liv works with performers who are diverse in terms of their age and experience. Looking to the future of the company Liv enjoys working with dancers who are very new to the world pf professional dance and have joined the company through balletLORENT’s apprenticeship scheme. Many of the company dancers have been with balletLORENT for over twenty years and audiences enjoy seeing familiar faces embodying new characters and are enthusiastically devoted to watching them grow with each performance.

“Liv was in her early 20's when I first auditioned for her and I was in my early 30's. I immediately knew that Liv was extremely bright and a visionary and that I had never known anyone quite like her. Twenty years later I feel exactly the same, I am still inspired by her tenacity and the diversity of her work. balletLORENT are a family on stage and behind the scenes, as are the amazing community casts we work with along the way.” Caroline Reece, Company Dancer

In the early stages of Liv’s career, she spent time with non-dancers who were receiving unemployment benefits. They received £10 extra if they worked in the studio with Liv for a week, inspiring her to engage people from the community to dance alongside professional dancers.

Many works created since then have featured an intergenerational cast of non-dancers and have included children, older people and pregnant women alongside the professional dancers. These large scale works of twenty to eighty dancers include PassAge to Passion; Life Stories; La Famille; andMaEternal. In latter years  (2012-18), balletLORENT engaged a community cast in its trilogy of fairytales - Rapunzel (thirteen 2-17 year olds), Snow White (eleven 5-8 year olds), and Rumpelstiltskin (ten 5-8 year olds and five older people aged 65+ years).

“We celebrate 25 years this year and continue to make a difference to peoples’ lives both through the world that is watched and the opportunities to dance that we create. I love that people remember so sharply a balletLORENT performance, even a decade later, and that it is often a beautiful and meaningful memory.” Liv Lorent MBE

Buy Tickets for After Dark

We're able to put our exhibition together thanks to the Heritage Lottery Fund.