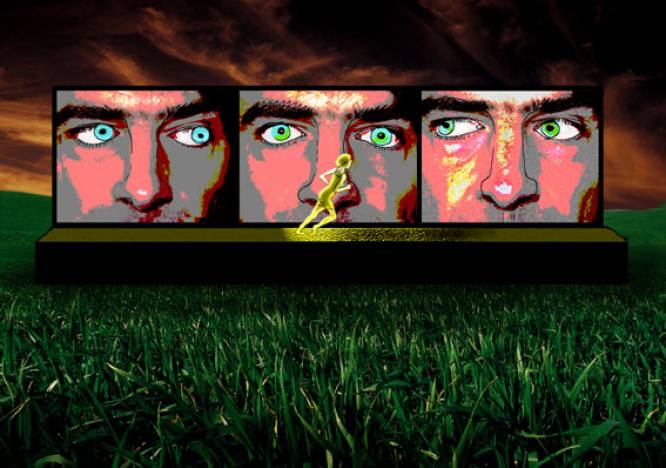 Four balletLORENT dancers went on tour with this work; Debbi Purtill, Caroline Reece, Meritxell Pan Cabo and Gavin Coward. Several other balletLORENT dancers featured in the film that was a large part of this piece, and the company’s first major experience of outdoor work and festival touring.

This piece was a commission for BalletBoyz and was hailed as "a sensuous, evocative duet that explores the unique narrative power of dance".

Angelmoth is sumptuous and the choreography crosses the boundaries between action and imagination, delivering expressions of qualities such as tenderness, wonder and warmth. 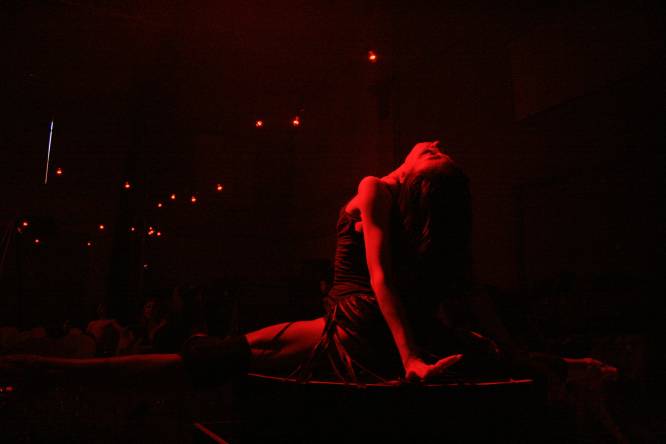 Recreated in 2009 as a collaborative project with 14 dancers from balletLORENT and Carte Blanche Dance Company, Norway.

Liv Lorent imagined what all the company dancers might do if left alone to their own devices in a bar with a bunch of eclectic costumes to try on, a set to swing on, tables robust enough to dance on, lights and wind machines to surrender to and a cracking set of songs on a playlist. The idea was to share the cramped spaces in a bar with an audience and be in touching distance of them while undergoing hours of dancing that pushed the limits of what intimacy meant. The audience were encouraged to come and go as they pleased to get more drinks.

Liv Lorent managed to touch on many genres of dance while putting an edgy, contemporary stamp on them and allow the audience to see, and almost touch, the intensity and vulnerability dancers endure during a performance.

It’s always connected to fantasy and feeling, to free- oating imagination and buried emotion, which makes its sensuality both more adult and more childlike – in short, more human.

‘Drunkenness’ is the closest word to describe the effect that the performance has on the audience. It is intoxication, but not fuelled by the Spitz’ alcohol fare.

This commission was inspired by the passionate and visceral approach to ballet that dancers in Mexico had.

"The undisputed highlight is Liv Lorent’s ‘La Penumbra’ - an exquisite miniature ballet, spiced with Latin spirit. Her three Mexican dancers are paragons of grace and symmetry, their performances enhanced by Malcolm Rippeth’s lighting design, which creates a backdrop out of their beautiful, oversized silhouettes. If only the evening had ended there we could have gone home happy." 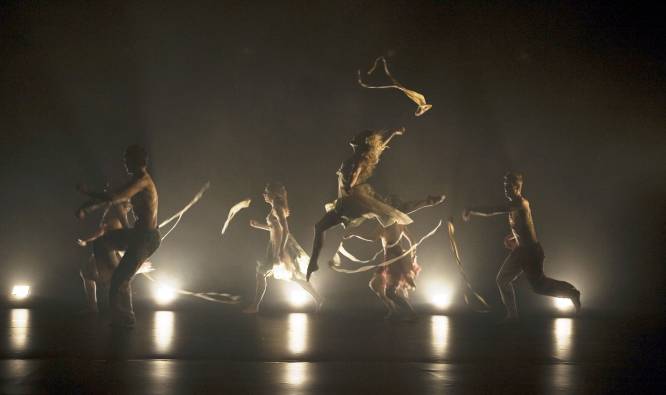 This was a dance theatre piece about willingly and effortfully seeking to tie yourself down to another human being. The flights of fancy and skyward reaching were curbed through the piece as couples tried to bind themselves to each other, get their jumping in sync, and discover a resolve to find any way possible to stay tethered to each other.

Working with composer Ezio Bosso and the dancers was an opportunity to push the romantic within the choreography and the music as far as Liv Lorent could, and create a bittersweet performance that toured widely.

Lorent is an impressively inventive dance-maker... crammed with ideas and wit, this is dance for the mind as well as the senses.

“I’m interested in how much and what kind of emotion I can make people feel,” Lorent has said, and in ‘tenderhook’, characteristically, she achieves this not by stories and characters but by more directly physical means – the sway of a spine, the touch of skin on skin, the tug of gravity and the freedom of falling – and so reminds us that the word ‘feeling’ translates both emotion and sensation.

Full of dark humour, dreams and doubt, this surreal work was all about the fear and wonder of pregnancy. It had been inspired by company dancer Kelly Wilson who had danced naked around a pole and on the rocking horse whilst visibly pregnant in a tour of la nuit intime. It was unforgettable and became a new aspect of female experience to be explored by the company. The piece consisted of several professional dancers and eleven pregnant volunteers who worked together over many weeks.

As always, Liv Lorent and her team provide much food for thought as well as leading the audience’s emotions. There are some rather misty eyes at the end!

Visually simple yet crammed with food for the eye and the imagination, ‘MaEternal’ is felt as much as it is seen.

“Lorent is an impressively inventive dancemaker… she is both an original and old school romantic.” The Guardian 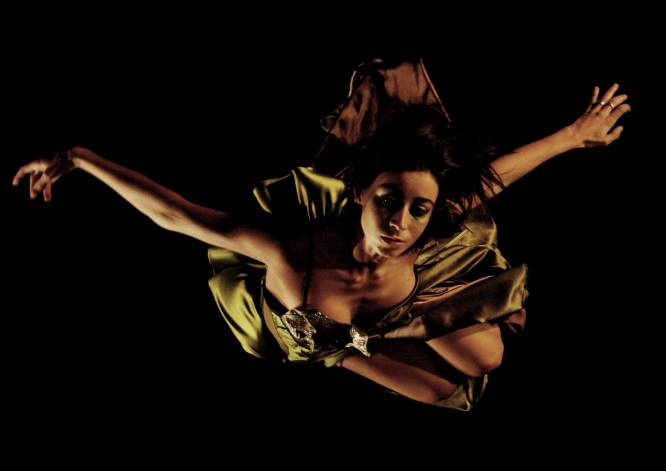 This work was made with real turntables that could go in two directions and spin up to 20rpm. The concept of this performance was to offer the human body at its most created and artificially presented beauty, with layers of costumes, hats, hairstyles, makeup... and then over hundreds of rotations lose every fibre, and end the body in its most natural and naked form. Designer Body was performed in the round, frequently with tiered seating and each dancer remained on their turntable alone for the 50-minute duration of a score created by :zoviet*France:.

A short film inspired by this work, shot in the Tyne Tower, was shown as part of Channel 4’s Random Acts.

That Lorent’s imagination contained so many different ways to stand on a plinth is remarkable. Even more remarkable, however, is the emotional effect that nudity can have when presented in the right way.

A lingering reward, a visual treat, and an hour from which each viewer can individually savor and interpret at their own leisure. They are left to recognize aspects of themselves, invisible partners in an exquisite burlesque. 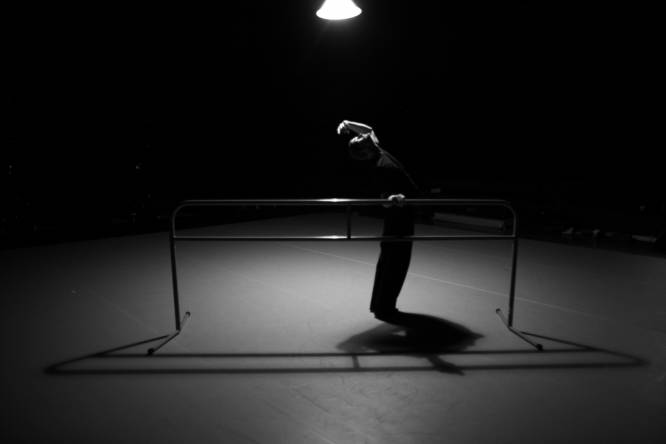 To Liv, Dan Daw is like a superhero. His body moves in ways that are unpredictable, unexpected and unique to him. His lyricism is all the more interesting for being sometimes jagged or fragmented and some movements take supreme efforts of will and control. For Liv, it was a gift, the stuff of wonder and beauty. She loved working with him and his unique body. The solo they made together was full of images of thwarted ambition, effort towards fantasy and escape, religious iconography and finally freedom. The work was challenging for audiences as Liv and Dan magnified and highlighted Dan’s quirks of movement rather than smoothed them out. Both enjoyed the experience immensely.

"I first came into contact with Liv and her work through Scottish Dance Theatre back in 2007. I remember sitting watching ‘LUXURIA’ in Blackpool, there being a lump in my throat and thinking, “My god! Who is this Liv?”. I had the same visceral response when I saw ‘la nuit intime’ and at that early point in my artistic career I’d not seen anything that resonated so deeply within me.

Liv’s work is vulnerable, it is sexy, it is strong and every fibre of my twenty three year old being was telling me that I had to find a way to work with her.

‘Crush’ became the first solo commissioned as part of Dan Daw Creative Projects and paved the way to my commission-based way of working and I continue to challenge the archaic choreographer/dancer hierarchy by inviting choreographers to make work on my body." 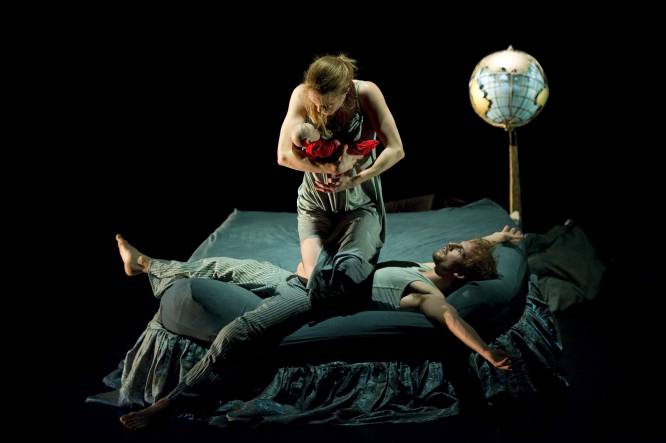 A partly autobiographical work voiced the experience of motherhood as an overwhelmingly powerful emotional rollercoaster where the infinity of unconditional love is discovered for the first time.

Part 1 of the work was a duet created with Gavin Coward and Phillipa White and appeared at the Assembly Roxy for an Edinburgh Festival Fringe run in 2010.

Sensitively powerful, full of beautifully crafted and exquisitely danced moments. You have given us, once again, a new language to enjoy!

Thought-provoking and moving, ‘Blood, Sweat and Tears’ is a marvellous evocation of the effects of one of life’s commonest experiences! 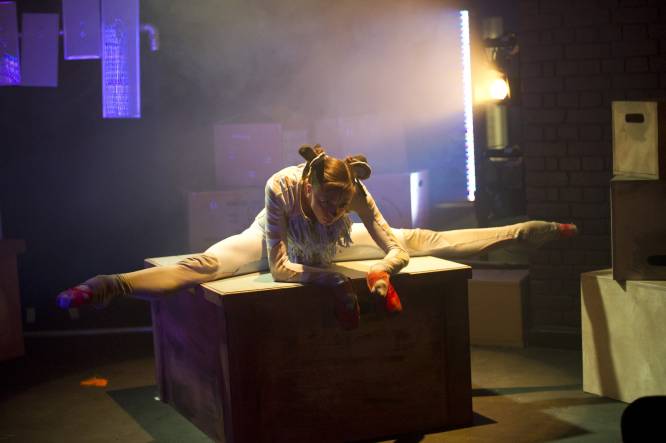 It was balletLORENT’s most extreme work in terms of allowing anarchy to reign and was influenced by a desire to not repeatedly have to re-seat an adventurous toddler. This show allowed children to follow their curiosity and trundle at will into the soft floor performance area and intertwine themselves into the choreography with the blessing of the ever amazing and adaptive dancers.

Underneath the Floorboards trailer

Liv Lorent could bottle and sell her treatment for under- 5's with the added inscription – this really works.

By continuing to browse or by clicking “Accept All Cookies” you agree to the storing of first- and third-party cookies on your device to enhance site navigation, analyse site usage, and assist in our marketing efforts. Cookie policy